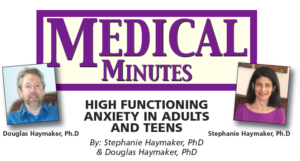 Do you feel anxious all the time?

Anxiety is a valuable set of reactions designed to keep us safe. In the days of saber toothed tigers, the “fight or flight response” was, literally, a lifesaver. When faced with a dangerous situation, a series of physical and mental events kicked in: the heart raced, attention focused on the threat, blood flow increased to allow extra energy for the muscles. Blood pressure rose and the brain tried to anticipate what would happen next. There was a rapid calculation – “Should I fight for my life … or run for it?” In caveman days, this was all the decision-making that was needed. Ahh, the good old days.

Things were simpler back then. Today, anxiety about giving a presentation for work or school does not allow for fight or flight. We just have to get through it. Fear of being unprepared for a geometry test also doesn’t allow for fight or flight (unless you can squeeze out a sick day). In the extreme, anxiety can become panic – with racing heart, clouded mind, and a sense of doom. There is an urge to flee the situation. Leave the situation and the panic (eventually) goes away. People tend to avoid similar situations in the future. Life can begin to feel like it is just about avoiding anxiety.

Anxiety is the single most frequent reason people choose to begin psychotherapy. It has been estimated that 18% of the population over 18 years old will experience an anxiety disorder. Despite the fact that anxiety disorders are among the most treatable, only 1 person in 3 seeks help. Everyone experiences anxiety. It draws our attention to potential danger and focuses us. But, like a car alarm that keeps going off for no reason – sometimes anxiety is a distracting, or even debilitating, false alarm.

Recently, “High Functioning Anxiety” (HFA) has been getting attention in the media. In 2014, Scott Stossel wrote in The Atlantic that he had struggled with severe anxiety despite being a successful magazine editor. Asked by a doctor how many episodes of anxiety he had, his answer was, “One, my whole life”. With HFA, the individual suffers with anxiety but somehow is able to do what they need to do. People with HFA may be very successful. Their suffering often is not apparent to others. But, inside, it can feel like torment.

Despite their success, people with HFA doubt the adequacy of their work They may worry for days about something they said, or did, or something that was said to them. Decisions can be paralyzing because of fear of being wrong. Sufferers may seem angry or irritable since they feel they are constantly on the verge of being overwhelmed. A problem at work may feel like a catastrophe. At home, frantic activity or social avoidance may be used to try to regain

equilibrium. High functioning anxiety is experienced in other ways as well. There may be excessive worries about their relationships, if their partner is trustworthy, or if they “really care about me”.

Adults are not the only ones who suffer with high functioning anxiety. Adolescent anxieties often include excessive worry about their appearance in addition to their competence. Feeling too fat, or too thin, too tall or short may plague the most seemingly-confident teens. For teens with HFA, perfection is the goal, and the enemy. Teens are social creatures, and there is much social learning to be done in high school and college. Fearful withdrawal can limit a teen’s chance to grow. Sports, academics, friendships, romantic relationships, college applications and the need to choose a vocation all can be fuel for HFA.

HFA teens perform, but with great effort and stress. They often have physical complaints – headaches and stomachaches are the most common. These physical symptoms may take the place of “feeling anxious”, and may take on a life of their own, as health concerns get added to the list of life worries.

Worries can seem endless. Each promotion, or success, can bring fears of being “found out” as incompetent. Some of these fears can become self-fulfilling prophecies, as fear of failure leads to worsened performance and critiques of their work. If these problems sound familiar, they are. Everyone struggles with these issues to some extent. Those with HFA suffer more and more often. Too much anxiety can rob people of joy in their lives, and satisfaction with themselves.

Only a few trusted people know how hard life can be for the person with HFA. But, if this private battle interferes with well-being, perhaps it is time to talk with someone who can help.