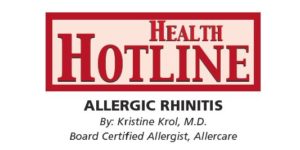 Have you ever had a cold that just won’t go away? Has your child been put on antibiotics month after month for treatment of recurring
ear infection? Have you suffered from many sinus infections every year? Do you know someone who does not smoke, yet has a chronic cough? If you answered yes to any of these questions, you may be surprised to find out that the underlying cause of each of these conditions
could be allergies.

What is an Allergy? To have an allergy means to be affected by something that is harmless to most people. The substance causing the allergic reaction is called an allergen. People can be allergic to all sorts of things, including pollens, molds, dust mites, animals, certain foods, insect sting or medications. It is generally accepted that the tendency to have allergies is linked to heredity.
Rhinitis: The symptoms of rhinitis includes inflammation inside the nose, sneezing, congestion, runny nose, nasal itching, burning palate
and throat, and headaches. Rhinitis has many causes. Some people have allergic rhinitis, which is a term used to describe allergic reactions
that take place when an airborne allergen is inhaled. This allergy was first called “hay fever” because it was thought to be caused by pollen from hayfields. While a hay allergy is possible it is now known that pollen produced by any plant as well as other allergens can cause allergic rhinitis. There are two types of allergic rhinitis: seasonal and perennial. Pollen from trees, grasses or weeds are usually to blame for seasonal
symptoms in Spring and Fall, whereas dust mites, mold and pets are the usual triggers of year-round (perennial) allergic rhinitis.
Some common complications or rhinitis include infected ears, fluid in the ears and infected sinuses. How does an allergy cause ear
infections? When the nose is inflamed due to allergic rhinitis, it is common for the Eustachian tube and ear to become involved in that
inflammation. The Eustachian tube can swell to the point of complete closure, trapping air in the middle of the ear cavity. Fluid then accumulates in the middle ear. This is called infection-causing agent such as a virus or bacteria is trapped in the middle ear cavity, the result will be an infected middle ear, or otitis media.

If a patient is desensitized to their allergies with allergy injections or sublingual immunotherapy (drops under the tongue) they will definitely see a decrease in the number of ear/sinus infections.
Please call Dr. Krol at 908-725- 8666 if you are interested in more information about Allergic Rhinitis or if you would like to make an
appointment for an evaluation to see what treatment is right for you.