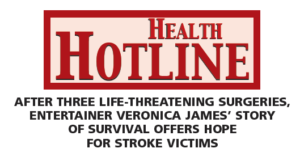 When actress and New Jersey native Veronica James made her debut appearance on the Netflix series “Unbreakable Kimmy Schmidt” earlier this year, it wasn’t just a thrill to be on a hit TV show. After three near-death experiences – resulting from a ruptured brain aneurysm – this accomplishment spotlights just how far she has come since her stroke. 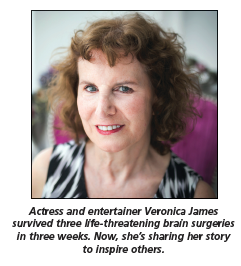 It all started with a typical summer day at the beach.

“When I came out of the water, something hit me – hard,” recalls Veronica. “I had terrible pain in my back and I fell down in the sand. I couldn’t walk.”

Off-duty nurses and an off-duty lifeguard rushed to help her. They called EMTs to rush her to the hospital.

Veronica underwent three brain surgeries in three weeks. These entailed coiling the aneurysm to stop the bleeding, dilating arteries in the brain to improve blood flow and inserting a shunt to normalize the pressure on her brain.

Each time, she only had a 50 percent chance of making it through the surgery and, yet, she survived.

Following the surgeries, Veronica was in the Neurosurgical Intensive Care Unit for three weeks. She needed to learn to walk and talk again with extensive speech, physical and occupational therapy.

“After medical negligence that tragically took my mother’s life, I was honestly scared of going to the hospital,” Veronica explains. “I have been so blessed to have Dr. Jethwa as my neurosurgeon and to have had the entire medical team I did. I wouldn’t be around today if it weren’t for them.”

“Veronica is a gold standard for stroke patients,” Dr. Jethwa says. “She’s living proof of what others may be capable of achieving after enduring serious trauma.”

Atlantic NeuroSurgical Specialists (ANS) is New Jersey’s largest neurosurgical practice and one of the most advanced in the country. For more information, visit www.ansdocs.com.