October 1st marks the hundredth anniversary of the controversial 1919 World Series pitting the Cincinnati Reds against the Chicago White Sox.  The White Sox were also called the Black Sox due to the scandalous allegations that White Sox players were involved in a scheme to lose intentionally to the Reds, as dramatized in the 1988 film, Eight Men Out.

My grandfather, age 20 at the time, attended Game 1 and wrote the score of the game, 9 to 1 Reds, on the ticket stub, pictured on the left, which is hanging on the wall in my study with other baseball memorabilia that my father passed on to me.

About ten years ago, not long after my mother died, my family congregated at my sister’s house in Cincinnati to sort through and divide up old correspondences and photographs.  As you might expect, it took a lot of time to do this, as each photo brought up memories and stories.  Not only did we have to deal with Mom’s material, we also had piles of material that Mom saved from our Stepfather, who predeceased her by 15 years.

At one point, my wife, Abby, found a sealed, thin, business envelope in my Stepfather’s collection that simply said, “World War I.”  She asked my sisters if she could take it.  There were no objections, so Abby just placed it in her purse.

After we returned to Warren, and unpacked, Abby pulled the envelope from her purse.  She slit open the envelope, pouring the contents onto our kitchen table.  And there was a ticket stub from Game 2 of the World Series, pictured on the right, played in Cincinnati on October 2, 1919.  Also ironic is the labeling of the envelope, as World War I ended in November 1918, about a year before this World Series.

We are still not sure what possessed Abby to take that envelope, why she did not open it on the spot and why a baseball memento was mixed in with World War I artifacts.  It is just nice, that after 100 years, I have a Game 1 stub from my father’s family next to a Game 2 stub from my stepfather’s family. 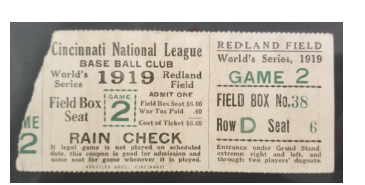